We're nearing the end of Scorpio season, and it wouldn't be complete without the Scorpio New Moon! There are some interesting combinations with this one that are going to have to be addressed. The themes in this one are a bit interesting, and are definitely a follow-up from the Full Moon we just had in Taurus! So who's getting stung? Let's play. 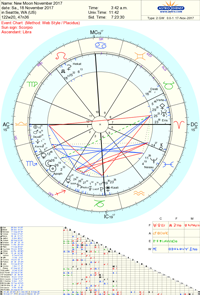 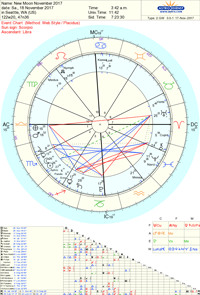 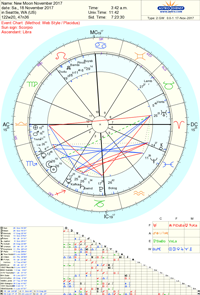 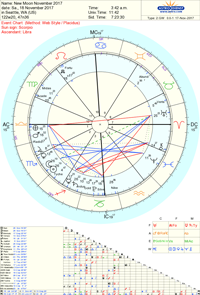 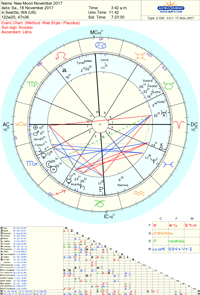 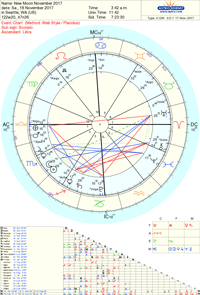 The New Moon is at 26 degrees Scorpio, and it will hit around 03:42 AM PST (06:42 AM EST / 11:42 AM UTC), so we're almost out of the Scorpion's domain. One of the strongest aspects I'm seeing to this New Moon is the opposition to Sedna retrograde on Algol. At only 5'33" of orb, themes of betrayal and heads rolling are going to be off the hook! Asteroid Lamb is with Sedna as well, and right now, the lambs are on the march to slaughter the wolves that have hunted them for so long. Only fitting that the phrase "wolf whistle" is the theme of what's been going on for the last month and a half, ever since the Harvey Weinstein scandal broke, and let me tell you, there have been a lot of dominoes falling. Now, the New Moon also trines asteroid Jabberwock, and it's no surprise that many indomitable figures have been brought low and humbled. As well they should. And with this New Moon semisextile Saturn on Galactic Center, sextile asteroid Bologna, and a weak conjunction to asteroid Aphrodite, as well as a trine to Chiron retrograde (itself slowing down for it's station direct early next month), the stage is set to get to the heart and the truth of many matters. It may be unpleasant news that you're going to uncover. Actually... I can guarantee it. (Just had unpleasant news career wise myself just yesterday). You can be guaranteed that if you have a dirty secret, it's coming out. Be ready to come clean.

Going into Mercury's aspects, many things are going to come clean, and again, not all of it is pleasant. Some of it will be, though! Mercury sextile Mars and asteroid Radiocommunicata in Libra during the New Moon will set in stone for this lunar cycle some revealing of truths, and with it some indecision as to what to do next (Mars really doesn't like being in Libra, as it's in detriment there). Do note that Mercury is now in pre-retrograde shadow, and at least on my own end, I'm already seeing technology being affected (my phone was acting up today). Mercury semisextile Pluto is going to be in a very tight orb for this New Moon too (almost exact, a 3'28" orb). Messages and communications that decidedly state that someone's paying the piper are to be expected for this entire month. And again, with the retrograde coming up in the middle of this lunar cycle, we're going to have some fun with this. It's not all doom and gloom though, as Mercury will also be trining Fortuna, Nymphe, and the North Node, and to a lesser extent, asteroid Dudu. We'll be able to get some headway against some of the crap that's been bogging us down, and may even be able to take advantage of some good fortune, whether it be career, romance, or clearing out of lies. Appreciate the small victories. You're going to have to.

Venus's role in this New Moon isn't so straightforward, as there's a bit of haziness with Venus trining Neptune retrograde. We'll be looking inwards to see what we find valuable, and may be prone to daydreaming as to exactly how we're going to pull this off. Venus trine asteroid Kassandra is tricky, as we'll be thinking about some warnings as to what glitters may not be gold, and could grow complacent as Venus sextiles Gold very strongly, while Kassandra and Gold oppose one another. So while you're keeping your eye on the prize, do bear in mind warnings as to some pitfalls that could befall you on the way to your glittering prizes.

On the energy and aggression front, Mars Squares Pluto! This is a very volatile energy that lends itself to arguments, aggression, violence, and shit breaking. Mars quincunx Rudra will amplify these off-kilter energies this lunar cycle. Expect big happenings that aren't going to go the way anyone thinks will go, especially with that Libran Mars indecisiveness. Now, fortunately, Mars does sextile Ceres, Fortuna, and Nymph, so there's that good energy component that might provide a tiny amount of shelter, but frankly, Mars/Pluto is very rough. Pluto does trine Rudra itself, however, so there might be a little bit of mitigation, and a possibility that the destruction wrought might not be so insurmountable as to prevent a rebirth later. Also, again, Mars conjuncts Radiocommunicata, so... with that combination square Pluto, it's going to be an... interesting news cycle this coming month. Expect controversies.

Jupiter is kind of subdued this Lunar Cycle. Jupiter conjunct asteroid Karma will bring big reaping of what has been sown, and it's going to be an eye-opener. Jupiter trine Lust retrograde, along with that conjunction to Karma? Indiscretions coming back to haunt people... and in some cases, forgiveness may even be possible for the lesser indiscretions. Or, maybe you did something right, and an ex comes back for one last fling. Maybe not so much for that, though.

Saturn conjunct Galactic Center is going to greatly amplify the constriction that the taskmaster and disciplinarian of the planets is capable of. There's going to be restriction of the good and the bad, for sure, as Saturn is also the focal point of a Yod between Sedna and Lamb retrograde (on Algol) sextile Jabberwock. Some ugly messes are going to come along, and it's Saturn's job to sort out the mess. And Saturn on the galaxy's center can be a might unforgiving. It's not as strong a Yod, mind you, as if there were major planets or points involved there. But Sedna is cold and rough alone. Honestly... I wouldn't be surprised if some of the people accused in scandals lately don't wind up restricted somehow... like going to prison or jail. Careers are already upended and ending. Saturn semisextile Bologna tells me that some more shenanigans are going to come to light as well, or some lie that someone got caught in is going to bite them hard. And we can't forget the Saturn square to Chiron retrograde and the trine to Uranus and Eris retrograde. Saturn's going to force us to deal with some unresolved pain, and it's going to make it a hard lesson. But, some unorthodoxy with Uranus will be of use to mitigate the chaos a little. Harness it and control it, maybe.

Speaking of unconventionality, Uranus retrograde has it's own set of affairs. Uranus and Eris retrograde trine Arachne could serve to upend some of the more obvious traps, or at the very least lead to some chance and sudden changes that block what ensnares you. Perhaps something ensnaring you winds up finding some chaos of its own to deal with. Uranus still semisextiles Sedna on Algol as well, so do watch for sudden changes you initiate in response to any betrayals, real or perceived. Try to keep a cool head.

As far as the aquatic planet, Neptune trine Leviathan may lead us to answers in our dreams as to how to deal with some seemingly insurmountable obstacles or adversaries in our path. Neptune opposite Midas warns us against daydreaming too much, however, lest we become an obstacle to our own success during this lunar cycle. Neptune quincunx Bambi, another minor asteroid, warns us to pay attention to our surroundings and to not get caught like a deer caught in headlights in regards to some of the chaos approaching us.

We finally get to Pluto, and it's not pulling punches. We already know about the square between Pluto and Mars/Radiocommunicata, but we also have Pluto quincunx Fortuna, Nymphe, and the North Node to deal with as well. While those three things had some warm aspects regarding Mars, Pluto isn't playing as nicely with those. Certainly some sudden impacts could spoil the energy Mars helps you put into those if you're not careful.

Finally, I'm going to leave off with Chiron retrograde. Frankly, Chiron's got it rough, as it's slowing down for it's direct motion next month, and Chiron square Arachne and Ixion could really lead to some uncomfortable entrapments and snares, and as it's retrograde, we could be trapping ourselves. Chiron semisextile Uranus retrograde tells me that some sudden actions will have a lot in how we handle our internal struggles and wounds. Watch for surprises this lunar cycle!

So there we have it... a hyper-intense month with a hyper-intense lunar cycle starting. Don't be disheartened if you feel like you're in the eye of the storm, as with the energies that have been hitting us with the major planetary aspects alone, believe me. You are not alone. If we exercise due caution and watch for hidden opportunities, we might be able to come out ahead after this lunar cycle. Be very cautious, though, as at this point, anything could happen. Don't take unnecessary risks during this cycle. That's all for now. Set some awesome intentions if you can.