Full Moon time is here, and as I suspected with the New Moon in Libra article, the facades have begun to crumble. Trust me, I've had a couple crumble in my life already, and to be blunt, I've got a hammer in my hand ready to knock the rest of it down on my end. By the time this lunar cycle ends with the following New Moon, there will be a great many more shifts. Let's get started. 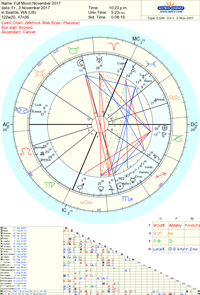 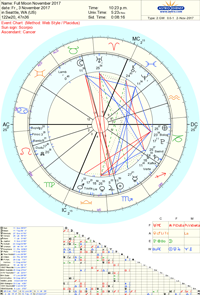 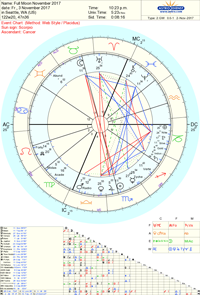 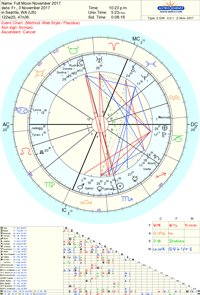 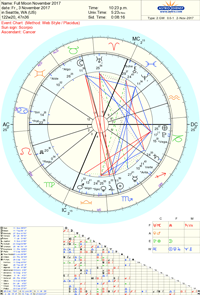 Beginning with the main event itself, the Full Moon in Taurus will sextile Neptune retrograde in Pisces. This is going to be a welcome sort of energy where we can turn our thoughts and emotions inwards and consider what we need to make ourselves feel comfortable, maybe safer. A good time to meditate as well. Thoughts about our inner spirituality should be enhanced a bit during this time, and it may be quite easy to dismiss altogether. the Full Moon in Taurus will also trine asteroid Silver in Capricorn. Now, Full Moon in Taurus is a fixed, earthy creature, and it desires stability and comfort. It opposes the Sun in Scorpio, of course, which is all full of secrets and murky aspirations. Appropriate that the sun is there for the Halloween season. Anyways, with Silver trine the Moon, and the Moon sextile Neptune (thus Sun trining Neptune and sextile Silver), there will be an increased focus on some gain for the remaining two weeks of this lunar cycle. Shiny objects, silver itself, money, it's going to be a focus. Silver is also a metal useful in the esoteric due to its reflective nature when polished, so things could be quite mercurial.

The Full Moon also quincunxes Radiocommunicata in Libra. Radiocommunicata is a minor asteroid that has to do with, well, radio and communications. Electronic media is going to be a bit off-kilter for a couple weeks, and... let's be honest, it's been off-kilter for awhile now. Radiocommunicata square Silver, since both aspect the Full Moon, tells me that news about money and material gain is going to have some unpredictable moments, or some downright misinformation as there's a good chance that people might not know what exactly is going on (based on the Moon-Radiocommunicata quincunx). And with Neptune sextile Moon, that means Full Moon and Neptune are forming a Yod to Radiocommunicata. Our inner thoughts and feeling are going to be affected by whatever is being communicated, so do take care to filter out the crap and stick to what's true. Easier said than done as we may not know what the truth, the whole truth, and nothing but the truth is. Follow your gut and try not to be too reactionary during this time period.

During this Full Moon we also have an intense Saturn square Chiron retrograde, and that is going to intensify some of the inner hurt, and maybe bring about some heavy intense inner healing if we make the sacrifices necessary. Those sacrifices are going to be rough ones for the next couple weeks as Saturn conjuncts Ixion and Swindle. Saturn in this position can help bind and restrict the violation of guest right (Ixion), and also put the brakes on some shenanigans (Swindle). On the flip side, with Chiron square those, the hurt could come from a violation or betrayal and the subsequent lies. It's a combination of both, as we can see with the sexual harassment and abuse scandals unfolding... nearly everywhere. Careers are effectively ending, and the most entrenched and unrepentant violators are not going down without a fight, it would seem. But many are surrendering to the march of progress...

...Maybe that surrendering has to do with Saturn sextile Venus and Vesta, and also Saturn trine Uranus and Eris retrograde, essentially forming a wedge aspect as Uranus-Eris retrograde opposes Venus-Vesta as well.. These predators have violated many people's most sacred thing , that being people's dignity (and control over one's sexuality is very much part of this), and it's not just women speaking up. Men are also speaking up, having been violated as well when younger. Quite frankly, the house of cards is collapsing. Venus and Vesta also straddle fixed star Spica during this Full Moon, and Spica is usually a beneficial star that acts as a subset of Venus and Mars. The upshot of Venus and Spica is benefiting from friends and being a star in social affairs... but the downside is being betrayed by those of your own gender. Watch your six, but enjoy well-deserved accolades. Ill-gained accolades will come crashing down sooner or later, so consider whether those are even worth it if you're thinking of it.

Speaking of denials crashing down, Pluto in Capricorn squares asteroids Toutatis and Lie in Libra during this Full Moon as well. Those that have enforced power through deceit and lies are finding that this is going to be a very uncomfortable couple weeks (if they haven't been sweating before!)... not just in sexual affairs, but also in the realm of political power as well. Corporate power I imagine is also going to be challenged, and even the realm of sports as the NFL protests show no sign of slowing down, and apparently the guy that owns Papa John's is even blaming a downfall in sales to the protests... is that the only reason? Is that the real reason? Honestly, this could get spun either way, as can many other stories. And that's proving the point of the other aspects going on! What is the truth? Radiocommunicata Yod with Full Moon and Neptune, remember? And I have a feeling a lot of people are not going to do the full research to come to the truth due to lack of time or desire.

We've got a major elephant in the room that tells me that the scandals and the resistance both against abusive influences and the desire to hold on to the status quo are going to intensify even further: A massive Yod Kite from Saturn sextile Venus both quincunx Sedna and Desdemona on fixed star Algol, kited by an opposition to Mercury in Scorpio. Sedna is betrayal by the patriarchs and by the husbands, if you know the Inuit legend. (Bride married off to another man, he turns out to be good, she swims back to her father, who chops off her fingers and she sinks to the bottom of the sea). Desdemona, well... its asteroid number is 666. It's fiendish. Where do Saturn, Venus, and Mercury all fit into this? Saturn, the taskmaster, is supporting Venus during this time, and Mercury is making sure the word gets out about all the abuses. Sedna and Desdemona are also retrograde during this time, so you could argue that the betraying patriarchy is in full retreat.

It's also appropriate that Jupiter and asteroid Karma are opposite Pallas retrograde during this point in time too. The goddess of wisdom and war, Athena (Pallas Athene is the full name of that asteroid) is basically, and symbolically, holding her father Zeus (Jupiter) to task, and he's standing firm. But Karma is there, and what goes around comes around. Jupiter also trines Nessus retrograde right now, so it's no surprise that some of the obsessive, predatory, abusive goings-on are being revealed, and in a big way. And I suppose with that trine it's appropriate that a lot of these people being outed aren't even fighting it, but are apologizing to their victims. ...not that mere words can ever erase the abuses these victims have suffered. At any rate, I think the discussion in Hollywood and other places of power about the culture of the casting couch may be coming to an end, or it could wind up being driven even further underground. (No, I'm not going to post any links to that casting couch...)

...You know, that brings up an excellent point. The fetish for deception and tricking people into giving sex or other rewards for false promises... that is going to be a very pertinent topic of debate soon, maybe even in the next couple weeks... mark my words. There are certainly enough aspects in the sky for this Full Moon and overall, including the asteroids, during this time, that points to this being a time of a great cultural shift... with great resistance on all sides.

I'm going to finish up with Pholus and Lucifer, on Galactic Center, sesquiquadrate the Full Moon. Given what I've discussed up above, it's only appropriate. The topic of intoxication and murky mindedness being taken advantage by the prideful, and the downfall that is coming by the rewards and security (Taurus Full Moon) being withdrawn from these proud instigators... More falls are coming. Appropriate that we're in the Fall season. Expect more scandals to come out in the next couple weeks. Frankly, the dominoes are about to fall. And watch your six (watch your back), as these dominoes can kill. They're that heavy. This also makes Pholus and Lucifer a part of that Yod to Sedna as well. Much broken pride in the future. I remember a passage somewhere about "those who exalt themselves shall be humbled", and vice versa. But do remember that there is such a thing as being too humble as well.

So there you have it. A super-intense culmination of a lunar cycle, and bringing to completion some crazy events, and the aftermath may just be the rising of a crescendo to many changes in our life, our ways of life as a society, and the long-term ramifications happening in our affairs. This article got a bit more preachy and current events-driven than I anticipated. But it's still good to keep in mind, and also is a good lesson in "as above, so below." As the world turns, so do the hands of the cosmic clock. Peace out.